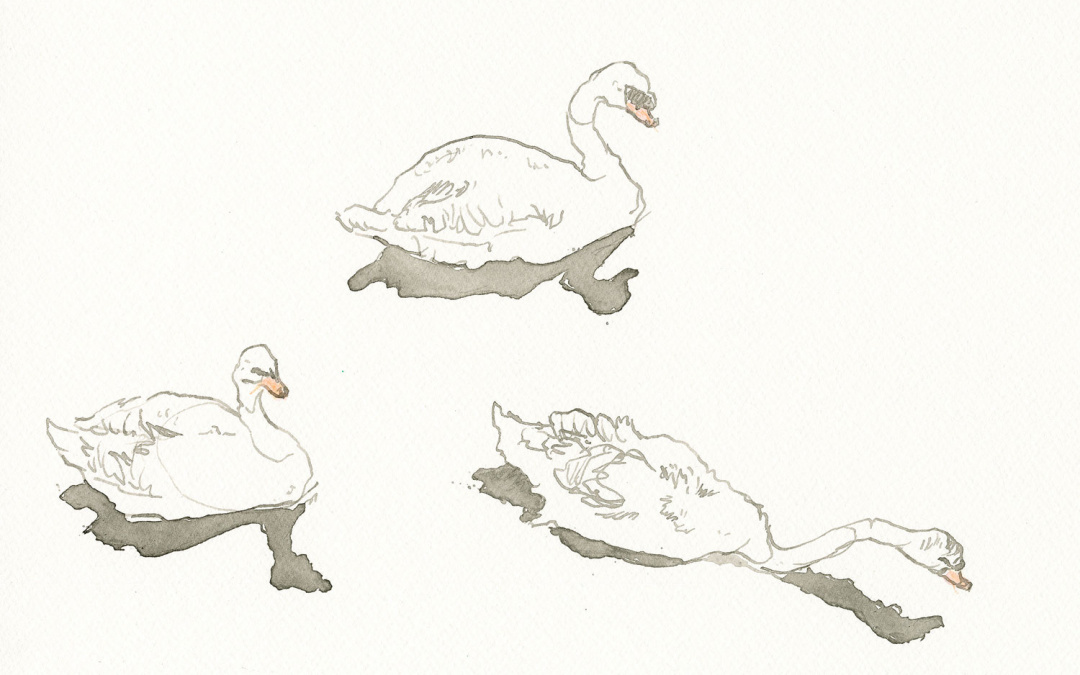 From Spring 2020 onwards I regularly photographed and sketched the canals and waterways which run alongside my Tottenham studio, documenting the flora and fauna which I found there. I began to notice how local wildlife such as geese and swans build families, connections and communities: mirroring the social structures which my own neighbourhood depends on.  I decided to document these creatures, as a reflection of my own wider environment. Eating Algae on the River Lea

In this piece, the flowing shapes and colours of the water serve as both habitat and patterned backdrop. Using contrasting material surfaces such as varnish, emulsion, chalk and oil pastel, I incorporated cutting techniques as part of the painting process. I collected a range of unusual and defunct tools in the studio, such as dried-up pens, screwdrivers and blunt pencils, and used these to shape and scrape the paint as it dried. This act of piercing and carving into the wet painted surface allows sculptural techniques to come in to the painting process. I’m excited by this new combination of drawing, painting and sculptural techniques, and intend to further develop this approach in the next phase of the Back to Life project. Geese and Leaves on the Glassy River Lea

Water is a famously tricky subject-matter. I am fascinated by the River Lea, which runs alongside my studio. The surface of the water seems so charged with colour and motion at that spot.

To create this artwork, I used an experimental combination of oil-paint and chalk pastels, which clog, pull and tear against each other as they’re applied to the surface. I used those opposing material qualities to describe the shifting surface of the river, which can change from an apparently hard, to a soft surface in a matter of seconds. Some areas of paint are scraped back with a palette-knife, revealing the wooden board. I used this technique to communicate an intense desire which I felt during the upheaval of the initial London pandemic: a drive to get ‘beneath the surface’ of my thoughts.

Alice White is an artist, tutor and lecturer. Her current series Back to Life documents the recent surge in wildlife in natural urban spaces such as the River Lea, Downhills Park, and Walthamstow Wetlands. This regeneration echoes Alice’s own story, as she re-shapes her studio practice following this period of uncertainty.

Alice is a Tutor at Central St Martins College of Art and Design, an Accredited Lecturer for The Art Society, and a Visiting Lecturer at University College London and Kings College London. Her essay A Painters’ Perspectiveis published in a book by The Alfred Cohen Foundation and Ben Uri Gallery (2020).

Her solo show A New Wave documented her year’s residency as Artist for Animals at ZSL London Zoo. Forthcoming projects include the Art of Science project at the Scott Polar Research Institute in Cambridge (2021). Awards include: Russell and Chapple Canvas Prize, the Annual Exhibition for the Royal Society of Marine Artists (2017).