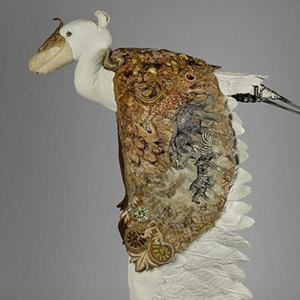 Sally Wilson ASGFA has been awarded first place in the prestigious Hand & Lock Prize for Embroidery in Textile Art; the internationally acclaimed award for creative and innovative stitch work.

“I am stunned but absolutely delighted to have achieved such an incredible accolade. The piece has literally filled my life for a year and it has been very challenging creating a sculpture which includes so much hand stitch work- a new experience for me. It is very gratifying and exciting to be the Hand & Lock Textile Art Winner!”

Established in 1767, Hand and Lock are an atelier who have supplied the Royal family, British military, worlds leading fashion houses and celebrities including Michael Jackson with some of the finest embroidery work for the last 247 years.

The Hand & Lock Prize was established in 2000 to give both new and established artists/designers interested in embroidery the opportunity to showcase their talents while gaining vital exposure and experience. 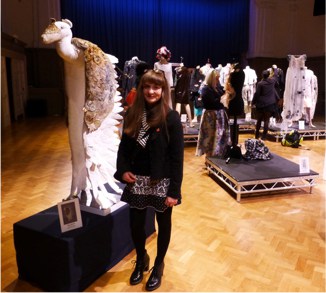 It rewards excellence in design and execution. For the first time the competition has accepted submissions for both fashion embroidery and textile art allowing entrants the opportunity to explore their creativity in a variety of ways.

“With the addition of a new category, the Hand & Lock prize has never been more dynamic and the judging was as demanding as ever.”    Hand & Lock

“The Hand and Lock prize was an excellent opportunity to test my improved dexterity following my accident, the idea being to create a design which followed Hand & Locks brief to ‘stand the test of time’ whilst ‘celebrating the history’ of something special. I investigated animals and birds which have neared extinction and came upon the magnificent if not bizarrely featured African Shoebill (Balaeniceps Rex- ‘King of the Swamps’).”

The piece is a complex amalgamation of free-machine and hand stitching and depicts the narrative of the Shoebills life and history.

Sally designed a cloak befitting the Shoebills ‘royal’ status and to disguise it from predators whilst it feeds on the swamp edges where crocodiles are prevalent; the cloak is ‘patterned’ to imitate the aquatic reptile and hence, create a protective shield.

She embellished the cloak with a coat of arms which celebrates its life; the catfish represents its main food source, the Sudanese flag-its domain and the whale representing its alternative title- ‘whale of the land’. The left wing of the cloak denotes the wildlife of Sudan. The right wing represents the hippopotamus which drives fish towards the Shoebill acting as an unlikely ally.

Sally welded the steel armature of the Shoebill and covered it with white fabric to represent its invisibility to predators. The cloak was then created using layered fabric, embellishments, hand embroidery and free machine stitch. No computerised embroidery has been used.

The piece took approximately eleven months to complete utilising over 30,800 m of machine thread, 350 m of Perle cotton and Lame metallic thread and it is embellished with over 1500 metal findings and 150g of beads.

For the brief applicants were asked to choose one established artist, and one archive, to research and inspire their own project. Sally took inspiration from the Artist Mister Finch for the sculptural and tonal qualities of the piece while the architectural castings at the V & A influenced the decorative motifs of the cloak.

Sally Wilson was born in 1967 in Holmfirth, West Yorkshire. Sally trained as a sculptor at Loughborough College of Art & Design gaining a first class honours degree before acquiring her textile skills through the City and Guilds Embroidery course.

In 2005 she suffered a traumatic brain injury and broke her drawing hand very badly. The accident ended her teaching career where she was Team leader of Art & Design at Huddersfield New College. Although her hand has improved immensely over the last few years, the brain injury has had a much slower pace of recovery and is unlikely to repair completely leaving Sally challenged with issues of concentration, fatigue, memory and fragmented thinking.

The accident had a drastic impact on the type of work Sally could produce. In the first two years of recovery she had minimal use of her hand and as a result, a simple free-stitch sewing machine became her only drawing implement. Much of the work in the early recovery phase reflected this but as her hand improved the work has diversified to incorporate her love of metal work and mixed media.

Sally lives and works primarily in Holmfirth, West Yorkshire but spends a few weeks a year in London, which has encouraged a more imaginative response to accessible resources in each location; she has a metal workshop and art studio in Yorkshire and textile facilities in Chiswick, West London.

The majority of work Sally produces are exhibition/event or competition pieces rather than work produced for commercial purposes. This allows her to cope with her ongoing health challenges although she occasionally takes on unusual commission work.

In 2016, Sally has been shortlisted for the Royal Academy Summer show, had two relief pieces selected /exhibited at the Royal Society of Marine Artists exhibition, Mall Galleries, London. Two relief pieces were shortlisted /exhibited in the National Open Art Competition at Mercer Hall, London. In October, two of her sculptures were selected for the Society of Graphic Fine Artists Annual exhibition where she also demonstrated drawing techniques as part of the Big Draw Festival. Sally has just been informed that a sculpture has been selected to represent the NOA at ArtRooms 2017 in January.