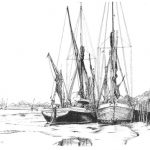 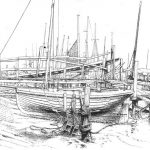 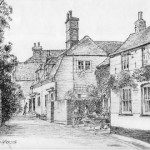 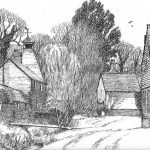 Trained in the City of London as an apprentice in an Art Studio. Attended Central School of Arts and Crafts on day release. Drawing under Professor Lehman, calligraphy with Mrs. Johnson.

Sailing and drawing marine subjects have been an important interest in my life as a working artist. My first picture sale was at the Royal Society of Marine Artists (RSMA) show in 1956. The picture was drawn from at the scene in pen and ink and showed a Norfolk Wherry loading sugar beet at Potter Hiegham.

The selection of my drawing by this influential Society and the choice of subject gave me the assurance that my drawings of marine subjects had merit. (The artist seeks to express and share the interest in the subject but, it is for others to make judgements about the merit of the work). I continued to exhibit with the RSMA when possible and exhibited work was included in the touring shows arranged by the Federation of British Artists (FBA) in the years that followed. The marine drawings have been local working craft, barges, fishing boats and tugs. Typical of these was a study of Thames Sailing barges in Suffolk, bought by the Port of London Authority – see Gallery.

In 1975 I began exhibiting with the Society of Graphic Artists, now Society of Graphic Fine Art, (SGFA – the drawing society) and was elected a Member in 1977. Membership of the SGFA provided a showcase for a change of subject matter away from marine subjects. Experiments with different mediums portraying landscape and townscapes. Elected President in 1979 until 1981. Also serving as a Governor at the FBA 1979 to 1981.

Made an Honorary member of the SGFA in recognition of service given to the Society.
Elected Fellow of the Royal Society of Arts (FRSA) in 1988

Work is included in 20th Century British Marine Painting by Denys Brooke-Hart, published by the Antique Collectors Club:
The clean-cut, accurate and economical drawing of this artist (William Geller) puts one in mind of the fine early work of E.W.Cooke (1811 – 1880) “good drawing is a most desirable quality in art today”.