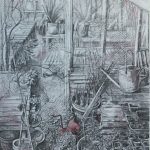 Sketches from direct observation evolve into sequences of paintings as the impact of a chosen subject is explored through a range of compositions and media.

Observational studies develop fluidly, using a wide range of individual or mixed media. Sequences of work emerge as the aesthetic impact of a chosen subject is explored. Sometimes a two-dimensional drawing will evolve into a mixed media collage, the collage then growing into a relief or even fully into three dimensions.

Paintings have been exhibited in the UK, France and Germany, and are now in numerous private collections. Commissions, residencies and opportunities have resulted in works being on permanent display in venues as diverse as JD Weatherspoons “Spon Gate”, Coventry and the National Trust’s Orangery at Charlecote Park.

In addition to successful one-person exhibitions, paintings have been selected for inclusion in prestigious shows at Derby, Birmingham, Chesterfield and Stafford Museums as well as at the Royal Watercolour Society, Royal Birmingham Society of Artists and St David’s Hall Cardiff. Full membership in the Society of Graphic Fine Art is a mark of the importance placed on drawing in all its forms.

Considerable teaching experience, including serving as a member of the Independent Schools’ Inspectorate, encompassed history of art as well as fine art and design technology. Far from being an intrusion, this career has supported personal artistic development. The two activities are regarded as interconnected and mutually beneficial.

Works have been accepted for open exhibitions at:

Works may currently be seen at: