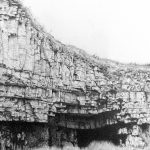 Now returning to Dorset, Paul graduated from Falmouth College of Arts in 1995 after A-Levels and Foundation in Poole and Bournemouth, Dorset. As a graphic fine artist intrigued by nature, he works exclusively in graphite and is interested in detail, texture and tone inspired by elements of the ancient landscape and stories of Wessex.

His work is created by research into the nature and history of places that interest him; geology, ecology and sometimes interaction with human activity. Walking is an important part of the working process, understanding the character and distinctive atmosphere of a certain area, as Paul Nash referred to the ‘genius loci.’ Much of his work comes from places that have been explored and returned to repeatedly, with an ingrained personal significance, a response to being affected by memories or experience over time in those places. He is keen to make links between the places that he finds and the stories that fashioned them. His influences are maps and writers, geologists and legends, songs and poems. Drawings and photographs taken in the field are then worked up into finished pieces in the studio.

He has shown work at various exhibitions across the South West, including the Bath Society of Artists, Mariners Gallery in St Ives and the Royal West of England Academy as well as in London and France.

Paul works as the event coordinator for Somerset Art Weeks and previously as a trustee and curator for Black Swan Arts in Frome, Somerset. He is also the curator of a recent touring exhibition, ‘The Transformed Land’ and is also a member of The Arborealists.