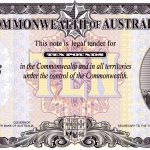 Michael Wilson began his apprenticeship as a banknote vignette engraver in 1974, studying offset and intaglio printing at the Slade School of Art and Reading University.

He retired in 2011 after working on more than 300 banknotes which included all the home countries, the Middle East, Far East and most of Africa. His skills include steel and copper etching, steel engraving, black and white artist, lettering artist, computer aided patterns, design and portrait work. He has worked on six banknotes of the year and eight runners up.

He has engraved for Royal Families around the world including Prince Phillip and produced over 40 postage stamps and passports. His final work can be seen on the Bank of England £10, £20 and £50 banknotes.