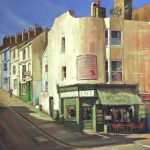 Concentrating on the city’s decaying and unique architecture, I try and capture the singular beauty to be found in those neglected buildings that have fallen into disrepair as the living city continues to evolve around them.

Lonesome street corners that hold an attractive melancholy, above our heads are the shop fronts of crumbling and faded grandeur that most of us will pass by without a second glance. It is this element of city life that I find intriguing and propelled to paint.

Born in 1977 in West London, I attended The University of Westminster to study Illustration. During the decade following this I temporarily exchanged my paint brushes for drumsticks and released a number of albums and singles to phenomenal commercial indifference! Following this sabbatical in the heady world of rock n’ roll I returned to my first love of painting.

Preliminary sketches are made (of some lesser–seen delights), drawing attention to parts of the city that are ignored on a daily basis. Sketches and photographs are then developed into larger canvas paintings. My aim is to find compositions that have an almost cinematic quality.

Desolate buildings, with their peeling paint, numberless front doors, and glimpses into empty rooms through uncurtained windows, naturally evoke a loneliness inherent in any large city. But their stillness also invites contemplation – of the lives once lived here, and the new lives that continue to do so.

I have works held in both private and overseas collections.

I have a painting featured in the Spitalfieldslife publication – East End Vernacular – Artists who painted London’s East End streets in the 20th Century.