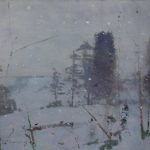 Fred was born in London 1930, attended Sidcup School of Art 1945 – 1949, Royal College of Art 1951 – 1955, Abbey Minor Traveller to Italy 1955, elected NEAC 1960 and ARA 1969, RA in 1974. Private and public collections internationally, awarded Honorary Doctorate in Literature Kent University 2004. The Royal Academy occasionally selects a member for a solo exhibition within the Summer Show and Fred was honoured in 2003. Artist in Residence at Christchurch Canterbury in 2016.

Fred has devoted his life to expressing the fleeting impressions of his surroundings, often painting the South Coast of England around Hastings and Rye. His work is about responses to the moods and atmospheres generated by landscape, still life or interior. He is interested in the developments of 20th century painting, in abstraction, that has been present in all movements and in new ideas and art forms.