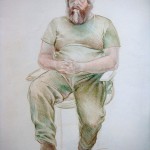 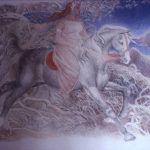 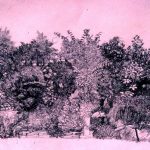 Elizabeth was born in 1960 in Auckland, New Zealand. She began drawing somewhere between learning to walk and to ride horses.

Even as a child she drew and sold hand-made cards depicting mainly horses. She was exhibiting in her teens in local art societies in Matamata, selling works to private collectors as well as to galleries.

In 1978 friends took examples of her work with them to the UK, which led to openings to take a foundation course at a Royal Academy Schools, though lack of funding meant she was unable to train in the UK. In 1982 Elizabeth graduated from Otago Polytechnic School of Fine Art, majoring in printmaking. In between, she won art prizes, including Highly Recommended Prize in Drawing at an exhibition at the Chingford Stables in North East Valley, Dunedin.

Prior to leaving for London in 1985, Elizabeth held a successful solo show at Moray Gallery, Dunedin, which included oil paintings and works on paper consisting of etchings, drawings and lithographs. In London she was self-employed as an artist and illustrator in publishing, and also exhibited original work at art galleries.

Elizabeth was invited to exhibit at Shop Window in the West End, staged by the Association of Artists and Illustrators in 1988 to show case upcoming new talent, and was a prize winner for Best Original Print at the Society of Graphic Fine Art annual open exhibition in 1993.

In 2000, Elizabeth trained to become a professional pilot, having flown privately since 1997. Although this is a departure from illustration and commercial art, when she’s not flying Elizabeth continues to paint and draw, and has recently made a fresh foray into fine art.

Her art is mostly works of the imagination, a fusion of romantic symbolism and surrealism, drawn from dreams, alchemy and mythology, expressed chiefly as fine drawings and etchings. She also enjoys drawing from life, and creating fine studies of nature.