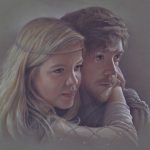 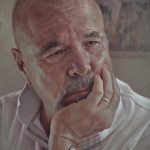 David Sandell works mostly in either pencil or oils; focussing on portraiture, he is fascinated by the human face as a representation of self, with its ability to convey subtle unspoken messages. Although he doesn’t consider his work mainstream, he frequently features in various International art publications (e.g. International Artist, Strokes of Genius and Creative Quarterly). In 2015 he was a finalist in the International Portrait Awards and finalist in The International ARC Salon. He has also exhibited with the Royal Birmingham Society of Artists and the Royal Society of British Artists.

He initially trained as a graphic designer and illustrator and holds an MA in Electronic Graphics.

He is joint founder/owner of Triad Limited, a design agency established in 1988, now based at Holdenby House stately home, in Northamptonshire.

Fellow of the Chartered Society of Designers.

Member of the Portrait Society of America.

Signature Member of the UKCPS.