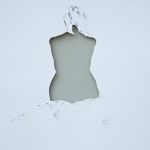 Charles was born in London in 1961 and educated at Ampleforth, a Catholic boarding school in North Yorkshire. Here he was taught to draw in the classical tradition by the sculptor John Bunting, himself a student of Leon Underwood. Later Charles attended art colleges in Exeter, Wolverhampton and Lyon, France, graduating with a 1st class Hons degree in Fine Art (painting) in 1984.

On leaving art college, Charles worked for many years as a street artist in London’s Covent Garden, drawing rapid portraits in pencil. It was here that he re-created the old English craft of cutting silhouette portraits with scissors, for which he is now best known. From Covent Garden he moved into the corporate events and entertainment market, finding an audience quite different from the world of fine art. Over two decades he has appeared at all kinds of venues and cut over 150,000 profiles, including many notable figures. These include two portraits of the Queen (the second cut at a party to celebrate her 80th birthday) as well as President Clinton (while visiting the National Portrait Gallery), the Duke of Edinburgh, and a large number of TV personalities, writers, artists and sporting celebrities.

Charles currently lives with his wife and two children in Reading, where he has converted a small eighteenth century barn into a studio. For the last 12 years May’s Barn (called after May’s Farm of which it is now the only remnant) has hosted a group of local artists who meet there once a week to practice life drawing. The barn can double as an ad-hoc gallery and is opened to the public on various occasions each year. Charles’ life studies have also been shown at the annual ‘Insight’ exhibition at New Greenham Arts, at an exhibition of life drawings in the Henley Exhibition Centre, and at various group shows in the Jelly Leg’d Chicken Gallery, Reading. He is currently seeking new opportunities to exhibit.

‘In one way or another I’ve spent my whole life drawing people. As a shy and awkward 1970’s teenager, drawing was the one thing that seemed to connect me with others. It allowed me to communicate (or at least to set down) my feelings about them, my fascination with the essence of who they were and my relationship to them. From an early age my ability to draw enabled me to make friends and helped to define my own sense of self. In many ways it still does.

‘The activity of drawing can take many forms. My favourite (reflecting the way I was taught) is to use a 3B pencil on paper. Today, after many happy years spent cutting silhouette portraits, this is followed a close second by a pair of scissors! Whether drawing or cutting, I always begin a piece by just looking, then by allowing my hands to respond naturally to what I see. The aim is always to reflect some aspect of the real person before me. I look for that essentially unknowable and mysterious personality that we all carry beneath the surface: the quietness of inner self.

‘The Western tradition of drawing from the nude has long been important to me. I experiment with a wide variety of styles and materials, from watercolour and collage, to oil paint and digital media. I sketch, cut, tear and paint my pictures, usually working with one method for six months to a year before moving on to the next. In that time I may make hundreds of pictures, only a few of which will ever be seen in exhibition. I’ve always enjoyed working fast! In between, while waiting for new inspiration, I simply draw with a pencil. This isn’t planned in a systematic way, as each new direction presents itself to me I tend to just follow it, but in the end I’m usually looking for the same thing. All these media feel to me like alternate solutions to the same problem, that of how to creatively depict small moments of insight about real people in communicable form. Each style brings its own failures and occasional successes, and each seems to speak to different people in different ways, but to me they are simply tools, new ways to tell the same story.

‘My current work is with a series of small studies in oil. I’ve always felt a natural affinity with oil paint, the physical smell and consistency of it seems somehow comforting and familiar, yet this is the first time since leaving art college in the 1980’s that I’ve found a way of working with it which suits my intentions. These are also some of the smallest paintings I’ve ever done, and I find myself enjoying the unexpected intimacy that this scale brings, luring the viewer into a kind of one-on-one communication which is both close-up and personal.’