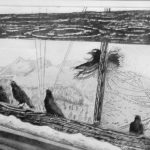 She has exhibited with Hampstead Arts Council and the Printmakers Council in London, France and Germany, as well as in Israel. She has also shown in exhibitions at the Barbican, the National Theatre, the Royal Festival Hall and at the Ben Uri Gallery, where she was awarded a prize in 1994. Aileen has also exhibited with the Royal Institute of Oil Painters, the New English Art Club and the SGFA, where she won prizes in 1993 and 1998. Aileen exhibited at the Royal Academy Summer Exhibition in 1997, 2001 and 2009, and has a work of art in the Ben Uri collection.