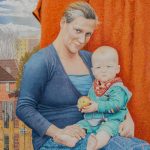 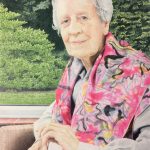 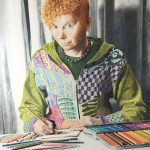 I returned to art later in life when I became interested in digital design and took an HND in Graphic Design at City of Bristol College (2007-2009). During this course, I rediscovered my love of drawing and went on to do a part time degree in Drawing & Applied Arts at the University of the West of England (2011-2017).

My main body of work is created in coloured pencil. I work on illustration board, painting a layer of gesso which follows the contours of my subject to give a more 3-dimensional effect and then drawing on the gesso surface.  Over the past few years, I have concentrated on creating portraits in which the subjects of my work are able to exert power with their gaze, looking back at and challenging the viewer.

The detail and intensity of my work has been influenced by the artists of the Northern Renaissance. I have taken inspiration from the compositions of the past (in particular those of Moroni, Bellini and Crivelli), creating visual references that play a game with the viewer.

In 2016 one of my drawings was selected for the Jerwood Drawing Prize exhibition which began at the Jerwood Space in London and then went on tour. My work has also been shown in various exhibitions across the South West including the Royal West of England Academy and the South West Academy of Fine and Applied Arts. In 2018 I was awarded the first prize at the Town Hall Arts Open in Trowbridge and this resulted in my having a joint exhibition there with painter Patrick Hallissey in 2019. I have been supported by the 44AD artspace in Bath where I am an associate artist and my work has appeared in several of their exhibitions from 2013 to the present.

Urban sketching is also an important area of work for me. It gives me the opportunity to get out into the world and engage with drawing in a different way.