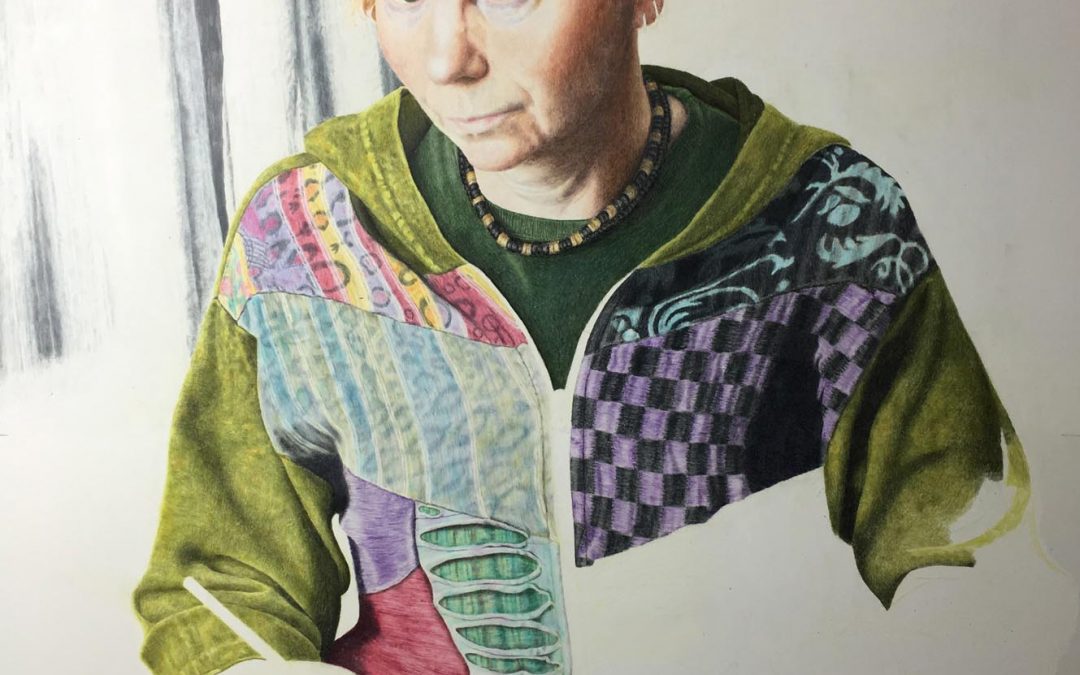 Highly Commended Work in Colour, sponsored by Stabilo – ‘Self Portrait’ by Jo Barber

Jo Baber with her work at the Jerwood Drawing Prize 2016

I returned to my childhood love of drawing later in life and have just completed a degree in Drawing & Applied Arts at the University of the West of England. I studied on a part time basis so my course lasted for six years.

What gave you the idea for ‘Self-Portrait’?

‘Self-Portrait’ in progress, by Jo Baber

This piece was the final project for my degree. I had been working on portraits for about three years but had never attempted one on this scale before.  It took me the whole of my final year to complete – up until Christmas to do the initial sketches and designs and then from Christmas to May to undertake the drawing.  In my most recent portraits, including this one, I have been experimenting by painting on an initial layer of gesso so that the brush strokes follow the contours of the subject and then drawing the image with coloured pencils.

My portraits explore the gaze of the subject rather than the viewer. The subjects of my work seek to exert power with their gaze, to look back at and challenge the viewer, striving to achieve dominance and become the protagonist. The detail and intensity of my work has been influenced by the artists of the Northern Renaissance and by Giovanni Battista Moroni.

Jo’s upcoming shows include the Open Exhibition at the South West Academy of Fine and Applied Arts which runs from 14th to 25th November.  For more information see www.jobarber.com