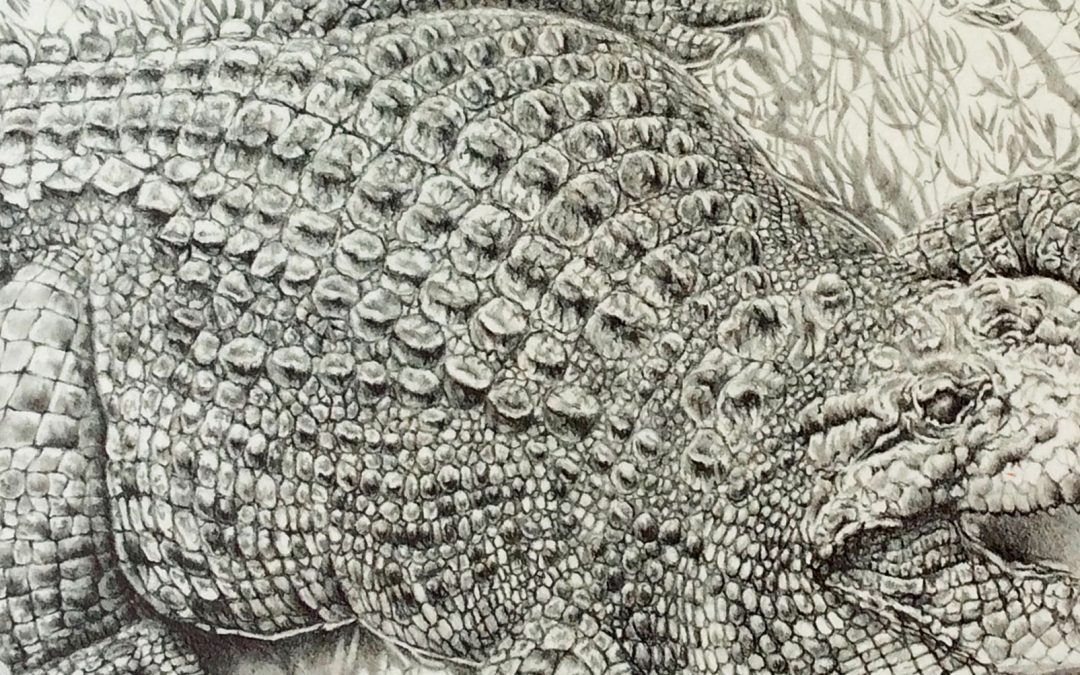 I have long been interested in animals as subjects to draw, given their diversity of form, surface patterning and textures, so when I spent a month in Australia earlier this year they became again subjects for my sketches. Old Croc, drawn last year and which appeared in SGFA 2016 Open exhibition, was the outcome of my last visit there. That was certainly a surface texture to grapple with!

I had always avoided the two visual clichés that are ubiquitous in Australia, the kangaroo and the koala bear. This time, however, I looked in more detail at these animals. They are unique to that continent. This uniqueness is of itself interesting. The koala feeds exclusively on eucalyptus leaves, which to most other animals are poisonous. It lounges around in trees for hours and hours, thus making it an easy subject to sketch. This semi static existence is perhaps not surprising for an animal with such a dense coat in a hot country. The kangaroo too is really quite remarkable, both visually and in its movement.  It can travel at 45mph (70 km) for short periods, and at a comfortable 25mph (40 km) for over a mile (2 km) to cover large distances in order to find food and water. At slow speeds it moves in a very ungainly manner, using its tail to form a tripod with its two forelimbs to bring its hind feet forward because the hind legs are fused together at the hips so cannot move independently, contributing to the powerful jumping mechanism. As marsupials the females carry and feed their young in tummy pouches, until they are quite big judging by a pair of very long hind legs we saw protruding from one pouch. At every reserve we visited we were able to walk freely amongst these apparently non-aggressive creatures, providing plenty of drawing opportunities. I enjoyed looking afresh at these two animals. Sometimes there is satisfaction in considering anew the source of images that have become so widespread and symbolic.

The “Koala” and “Kangaroo” drawings will be on show at this years SGFA @ Bankside – the drawing society, Bankside Gallery, London from June 6-18 2017.

Further information about the artists can be found by visiting http://susanpoole.co.uk/