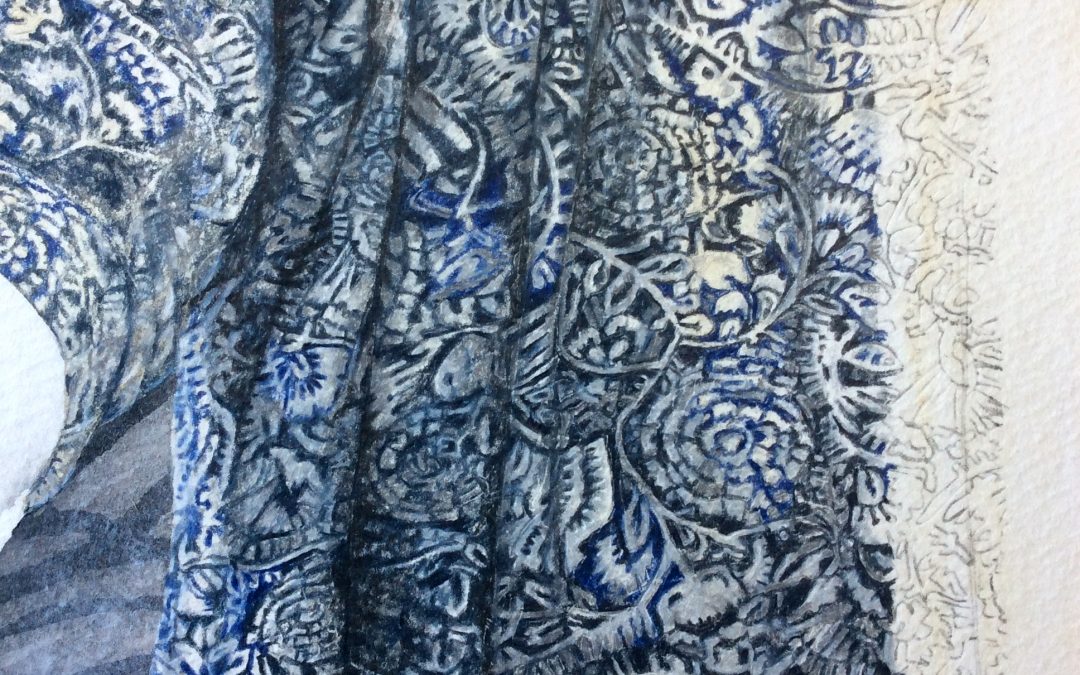 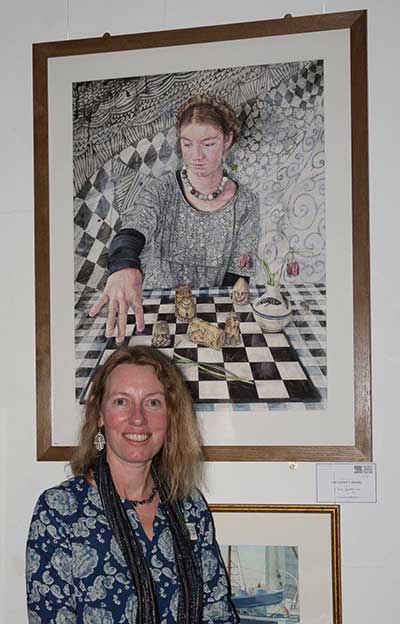 Congratulations to Claire on winning the President’s Award for her pencil and watercolour work “Schachbrettblume”. The piece was selected by PSGFA Jackie Devereux.

A pot of Fritillary Flowers initiated the research which led towards my painting ‘Schachbrettblume’. I love Spring flowers, and although the Fritillaries are not best suited to my shingle garden, I couldn’t resist buying a pot. Following a thread of research always excites me, and I enjoyed finding out more about these beautiful flowers. They have been given many different names such as ‘Snake Flower’ and ‘Leopard Lily’ which refer to the incredible checkered pattern of their petals . They are considered at once beautiful yet also having a darker side. Vita Sackville-West described the Fritillary as ‘a sinister little flower, in the mournful colours of decay’. ‘Schachbrettblume’, translated as ‘Chess Board Flower’, is a German name for the Fritillary.

This was a tremendous inspiration and I immediately chose this name as the title for my painting. It worked on many levels. I have for a long time been interested in German culture, the language, and felt it would be right for the atmosphere of the work. The ‘Chess Board’ in terms of both pattern and symbolism suggested a wealth of possibility, and the ‘Flower’ might refer to both the plant and the young woman playing in the composition. Detail from Schachbrettblume by Claire Sparkes

Having decided upon the title and the atmosphere of the painting centered around the chess board… I started with the young woman’s shirt  I had wanted to paint this since buying it because of its intricate pattern, and this seemed the perfect opportunity. I arranged a sitting with the model for the painting, when we also decided upon the germanic hairstyle. On starting to draw shirt, however, I realised what I had taken on! I probably worked on the shirt alone over a period of a month, and had to buy some glasses!! Up until this point, the painting had been conceived as monochromatic. The shirt is actually a dark indanthrene blue or indigo, and I felt the subtlety of this demanded colour within the painting. So a central flush of colour was created fading out to monochrome.
I enjoyed working on the shirt, but it was a relief to finish it!

The black and white checkered tones of the chess board are suggestive of the duality of the game the young woman is playing, and of human nature. ‘Schachbrettblume’ has actually evolved as the first of a series of paintings symbolically using the checkerboard pattern to discuss duality and polarities in human life. Life and death, sacred and profane, good and evil, all co-exist in an often precarious balance. Here a pattern of light and darkness is seen in the fragile beauty of the ‘flower’. The chess pieces were chosen from a ceramic set I already had and treasure Detail from Schachbrettblume by Claire Sparkes

Full of character, they were perfect for the roles they had to play. Their arrangement was set after reading an old folk tale about a queen who was turned into a Fritillary flower.

Three more paintings from this ‘Checkered ‘ series may be seen in the Mall Galleries, London, from 3rd – 18th April where they will be exhibited with the Royal Institute of Painters in Watercolour.

The President’s Award 2018 for ‘Schachbrettblume’ by Claire Sparkes