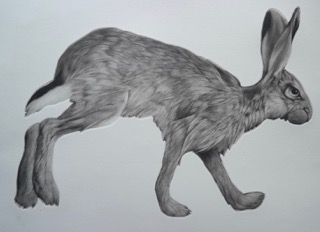 Mezzotint can be a very laborious process, particularly if making a larger scale print. It also can settle into something of a pattern. With Trotting Hare I wanted to make a print which broke with the convention of the negative (light) image on the dark background, reversing it to have a dark image on blank paper. Ultimately, the aim was to create an image resembling a studio photograph.

With all this in mind, I tried something a bit radical purely as a one- off experiment; cutting up an old plate, sculpting the copper in the shape of the image itself and printing it as a positive. All I needed was an old plate, electric drill, jigsaw and various files. The finished image was slightly playful with the hare’s foot touching the mount on landing and adding to the movement left to right. The trial version had the same intention but I felt was a little out of balance. It does break up the picture space into more interesting shapes though. The edition is only 10 and I might try that later as it will mean cutting the plate in half. The prints are also not signed in the usual way (between the plate mark and the mount). I had to sign them on the print itself and they are signed on the front (left) foot. My most successful work has been prints of hares. I was captivated by Durer’s hare and tried to paint it and couldn’t, tried to draw it and couldn’t but could do it in print.

It’s always a real boost to win an award or prize. It gives you confidence as an acknowledgement or indorsement that what you’re doing is in fact pretty good quality. You need that from time to time, just like sales. I would advise any artist to enter open exhibitions or competitions as it’s the only way you’ll ever get those “am I good enough” questions answered. This print was rejected from both the SWLA show and the RE Masters exhibitions this year so expect knock- backs but don’t get disheartened. It’s obviously not what they were looking for but that just highlights the subjective nature of the business. Always do your work for you, something you love or identify with, not for the competition and it will be truer to yourself. That is the genuine quality we all strive for (and can’t fake!).

I am currently working on the theme of unusual trees which now feature very prominently in my graphic work. I draw these in the many sketchbooks I have ongoing at any point (different sizes and formats, usually A3 or A4). I have been drawing since I was able to hold a pencil but the sketchbook has only been a fundamental part of my practice for the last 15 years or so. The following images are all done in sketchbooks, on site and worked up in the studio. 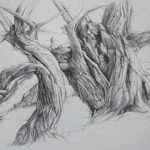 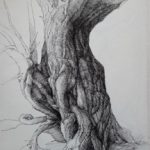 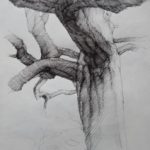 These drawings will form the basis of a series of prints, I anticipate all being done in mezzotint, which will be a first real major series.

The Best Print Prize was sponsored by Arqadia and Intaglio Printmaker. The SGFA would like to thank our sponsors once again for their continued support.